2017-06-06
The EIC trained 113 new and 26 existing officers and graduated them on June 2017 at the Meeting Hall of its Head Quarters.
Present at the graduation ceremony were Mr. Nesanet Lemessa, the Chief of Executive Officer of the Corporation and other management members. 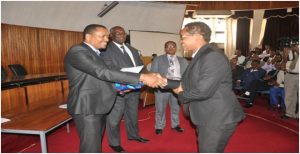 The CEO gave certificates to the trainees and awards were given to the outstanding ones.

The CEO at the ceremony lauded the graduates for making the EIC their choice company and informed them that they made the right decision for their career development. He further advised the graduates to put to practice the skills they gained during the training.
Ato Amanual Gezahegn, representing the trainees, gave a vot of thanks to EIC.