Ethiopian Insurance Corporation trained and graduated 95 trainees (73 new and 22 existing employees) on July 3, 2018 at its auditorium. The training were conducted for about two months dated from April 26,2018 to June 30-2018.The training session largely focused on principles and practices of insurance and how to use the existing insurance and accounting software ( i.e. INSIS and AGGRESSO).

On the occasion, Ato Netsanet Lemessa, CEO of Ethiopian Insurance Corporation, delivered a speech to the attendants (management members, trainers and graduates). The CEO, on his speech, appreciates graduates for choosing EIC and informed them that they made the right decision in preferring EIC for their future career development.
Ato Netsanet noted that graduates need to put the knowledge and skill they acquire during the training session in to practice. Besides, he stressed that graduates are highly required to improve the existing talents and competencies by exerting extra effort and referring various sources. On the other hand, the representative of the trainees, Ato Belayneh Asmare, discharge vote of thanks to those who contributed at large for successful accomplishment of the training session and gave assurance that they (graduates) will exert their maximum effort to realize the vision and objectives of the corporation. 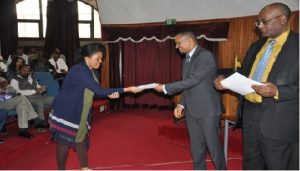 Ato Netsanet Lemessa handing over certificates to the trainee officers

Finally, the CEO gave certificates to the trainees and awarded the outstanding trainees who registered uppermost achievement during their training period.
In general, the corporation regularly train and deploy new and existing employees twice a year to address the man power demand of the corporation. The ultimate intent of the training to equip the trainees with relevant knowledge and skills which enables them to perform their duties properly and consequently the day to day operation of insurance business as well as customer handling process will be effective.